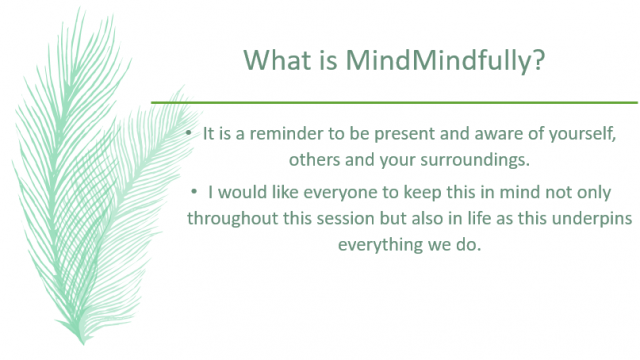 Mental health education should form part of the national curriculum, I believe lessons and workshops in this area should be given equal if not more importance than core subjects such as maths and science. Raising awareness, reducing stigma and supporting our young people’s mental health should be a priority as it will have a positive impact on every aspect of their school experience and in later life.

The timing of the workshops couldn’t have been better, the students had just begun their exams and were experiencing high levels of stress and pressure. The workshops gave them time and space away from their books which acted as a mental break. And it proved necessary as a huge proportion of the students expressed feeling extremely overwhelmed but enjoyed the different nature of workshops and it allowed them to relax.

Workshop 1: An introduction to Mental health

The first three sessions established the students thoughts about mental health and what it meant to them. At the start of each workshop I made it known that sensitive topics will be discussed which may induce feelings of discomfort; verbal consent was given before proceeding with the workshops.

Each student completed The Perceived Stress Scale (PSS), (Cohen et al.1983). The PSS is the most widely used psychological instrument for measuring the perception of stress. It is a measure of the degree to which situations in one’s life are appraised as stressful. Items were designed to tap how unpredictable, uncontrollable, and overloaded respondents find their lives.

You can find the interactive questionnaire here: https://www.bemindfulonline.com/test-your-stress

The workshops involved open discussion, debates, personal reflection, group and pair work, the use of anecdotes and sharing personal experiences as well as hearing the views of other students in a similar position to them when watching videos. Although I led the workshops, the main teacher was also involved and shared personal anecdotes, encouraged participation as well as helped with general class management.

The first workshop: Introduction to Mental Health was delivered across three weeks, it was important to give the students time to express themselves during the group discussions, pair and individual work.

With that said, the original timings of the workshop were as follows:

At the very end of the session I asked the students to reflect and provide feedback on how they felt during the meditations; as well as overall feedback from across the six weeks.

Each week I looked forward to delivering the workshops, it was great to engage and learn more about the students. It was evident that they felt more comfortable and grew in confidence week by week. I was amazed by the students ability to articulate and express themselves, they were open and honest and displayed great maturity when sharing their thoughts and feelings in the presence of their peers. The workshops revealed significant findings and in response, the head of English and I have collaborated to provide a drop in session once a week whereby students who feel as though they need to talk to someone can do so.

This work is licensed under a Creative Commons Attribution-NonCommercial-ShareAlike 4.0 International License.